Things to do in Gozo

There are lots of things to do in Gozo. Located in the Mediterranean north of the island of Malta, it is distinguished from its big sister (3 times larger) by its calm and its senérité. Less urbanized and more rural than Malta, Gozo is actually the island of quiet holidays in natural surroundings

To get there, there are not 36 solutions: you have to take the ferry to the ferry terminal of Cirque in Malta then to count about 25 minutes of crossing to reach the port of Mgarr in Gozo, only 5 kilometers separated the two islands . This ferry crossing imposes an already-rhythm to the discovery of Gozo, that is to say in the slowness to better appreciate it. The best is also to quickly climb on the bridge to better take advantage of the path and The discovery also on the way The small island of Comino.

View from a distance Gozo seems totally deserted, made only of rocks and vegetation, with a few small boats along its shores . More info on the approach of the here and there discerning houses located on Its heights. Similarly the color that the rock, these are actually blended in the landscape, which is to your construction with the local limestone which is said to be the color of honey.

As soon as you drive on the island, after having disembarked from the ferry, you can quickly see the beautiful church dedicated to Saint John the Baptist. Located in Xewkija, this one is visible from the main points of the island because it is surmounted by a large dome … it will thus set the tone on a certain architectural richness of Gozo.

Punctuates of Mediterranean vegetation, cultivated fields under development in the region, which tends to think that agriculture plays a preponderant role in the economic activity of the island. 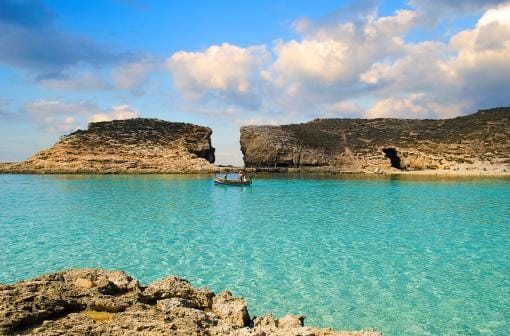 Gozo has a unique historical site classified as a World Heritage Site by UNESCO, it is the megalithic temples of Ggantija near the city of Xaghra, or rather what remains of it because they are today ‘State of ruins. An archaeological museum adjoining the site presents a number of well-preserved objects that have been found on this site.

Old for 5 millennia and with stones rising more than 6 meters high, the construction of prehistoric temples remains an enigma for archaeologists. A legend indicates the feelings on the island, hence the name Ggantija meaning “gigantic”.

The countryside in the background, old stones, Mediterranean vegetation, sunny surroundings, quiet … even those who are not history and archeology, I appreciate the visit of this place

The most beautiful beach is located in the bay of Ramla on crystal clear waters, it is very popular with Gozitans and tourists. Not far from there are the salt works of Gbajjar near Marsalforn. Composed of different basins created in the clay soil, those that are 2000 years old, is a curiosity to discover.

But is in Dwejra that the Gozo’s most famous natural sites are:

Each village of Gozo has a church, often disproportionate to the number of inhabitants, and it is to believe a competition exists between the different villages to know who will have the most beautiful The small village of Zebbug, for example, has a church dedicated to Our Lady of the Assumption. It is known that a small feast is preparing in the village and that the villagers ring the bells of the church with turns of arms. The Gozitans (but also the Maltese) at a high pilgrimage site in Gharb in the center of the island, the most famous of the Maltese archipelago, is the Ta’Pinu basilica built in the middle of The campaign on a site where you make room for many “miracles.”

But on can not go to Gozo without visiting Victoria, the medieval fortified city once called Rabat. These are not what one finds in the area of the old town … one can indeed and admire beautiful houses of character.

Their facades are magnificent with balconies and entrance doors often worked. Sometimes on the fronts is a molding or a mosaic representing St. George, patron of the knights, slaying the dragon: a religious symbolism showing the triumphant good on the evil.

Historical religious faith of the Gozitans can be seen everywhere, statues of Saints or the Virgin Mary are often positioned at the Que charms for this old city of Victoria for a little one would take it for a museum open skies crossings of Pedestrian streets.

For a quiet lunch at the water’s edge, Xlendi Bay is the place to be. Sheltered by cliffs, this one proposes some typical restaurants.

Other things to do while in Gozo

Last but not least, come pay us a visit while you are here and enjoy some of the best food Gozo has to offer.